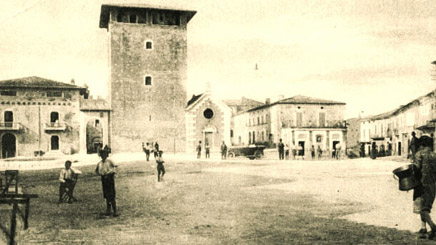 The millennial history of the Castle is told by the building itself, that testify the developing of the building during the centuries. The Castel rises on the ruins of a Roman villa and has still nowadays the tanks and the walls, an example of the “opus reticulatum”.

The main core of the building, that is on four floors, has a surface of about 1600 sm and has been restored in a way that has preserved the ancient charme of Castel Marcantonio.

Alex Tower has 3 meters large walls; it was built by the Longobardum as a fortress. It is 24 meters high and is the emblem of the city. It seems that the name “Alex” comes from Alessandro Valignani, marquess of Cepagatti, in 1632. The arch that join the tower to the Castle was the ancient gate to access to the city.

There is in the end also the little Church of San Rocco, built by the Valignani family to thanks the Saint for having safe them from the plague in 1657.